An Introduction to Lambda Phi Epsilon

Lambda Phi Epsilon is a one-of-a-kind first and currently only internationally recognised fraternity for American Asians. Its mission is “To guide men on a lifelong discovery of authenticity and personal growth”. And its vision is “A world where Lambda men live authentic, fulfilling lives and contribute through the pursuit of their noble purpose”. Lambda Phi Epsilon has various affiliations, out of which the most important being with the North-American Interfraternity Conference and the National APIA Panhellenic Association.

Lambda Phi Epsilon was formed in February 1981 in the University of California, Los Angeles by 19 men along with Craig Ishigo. Observing that other Asian sororities and fraternities catered to only specific kinds of Asian groups, and excluded other Asian groups, Lambda Phi Epsilon was created as a fraternity that would transcend the boundaries of nationality and national origins. It was remarked to bridge gaps between the Asian college communities and is now recognised by the Greek Community as well. Although in the beginning, Lambda Phi Epsilon centred its focus on the Asian –pacific Americans, people from all ethnic backgrounds are now encouraged to join. The charter was signed by Craig Ishigo as the president and Darryl Mu as the vice-president of the community. , Lambda Phi Epsilon has 5 core values. These are as follows:

Authenticity- That is the “willingness to show our true selves to the world, despite the pressures and expectations that are placed on us by society.”

Courageous Leadership- To act with “integrity, especially in times of adversity, in the pursuit of a more humane and just world.”

Cultural Heritage- To be in tune with their cultural heritage and “ever changing values, ideas, and experiences of a people, transcending generations.”

Love- To increase the spirit of fraternity and “care and respect for ourselves, our brothers, and our world.”

Wisdom- The last core value, which deals with the “pursuit of understanding and its positive application towards our lives and the world.”

Keeping these values in mind, with its mission and vison, Lambda Phi Epsilon fraternity has grown considerably. In a few years, the fraternity had chartered to the State University of New York, Buffalo (Nu Chapter), the University of Michigan (Xi Chapter) and the University of Texas, Austin (Zeta Chapter). It was the first Asian-American fraternity to be recognised by the North-American Interfraternity Conference in 1990. The fraternity does a lot of philanthropic work, out of which conduction bone marrow drives for patients with various blood disorders, especially leukemia is one of the most well-known and rigorously carried out event. Every chapter of Lambda Phi Epsilon hosts bone marrow drives and usually hold it in conjunction with the Asian American Donor Program, Asians for Miracle Marrow Matches, and the former Cammy Lee Leukemia Foundation so as to spread awareness about leukemia and attract more donors every time.

Lambda Phi Epsilon holds conventions on Memorial Day every year across North America along with the sisters of alpha Kappa Delta Phi. There are various events that are held, including seminars and workshops, and networking sessions where people from different backgrounds and career paths get to learn more about each other and intermingle. There are also career-oriented workshops which are held by notable alumni and socialise with other members from various fields. 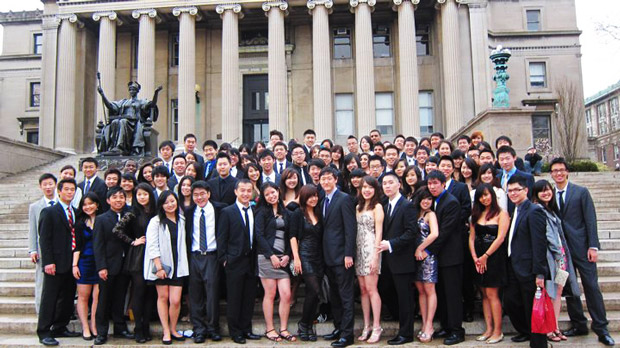 The fraternity also awards scholarships to outstanding and deserving members, whom they choose from a large pool of applications every year. There are three main scholarships offered by Lambda Phi Epsilon. These are as follows;

The Columbia Lambdas have also given back to the community, volunteering at various neighborhood charities and offering free consulting for businesses around the country, from Los Angeles to Houston.

There are a number of notable alumni which were part of the Lambda Phi Epsilon community. Some of them are Yul Kwon, who was the winner of the show Survivor: Cook Islands and has been termed People’s magazine’s sexiest men for 2006. He has also served as the deputy chief of the Federal Communications Commission’s Consumer and Governmental Affairs Bureau. The other is Paul Qui, who was the winner of Top Chef: Texas, in 2012. He was also the recipient of the 2013 Young Chef of the Year award at the 13th annual S.Pellegrino Cooking Cup, where he represented the United States of America.